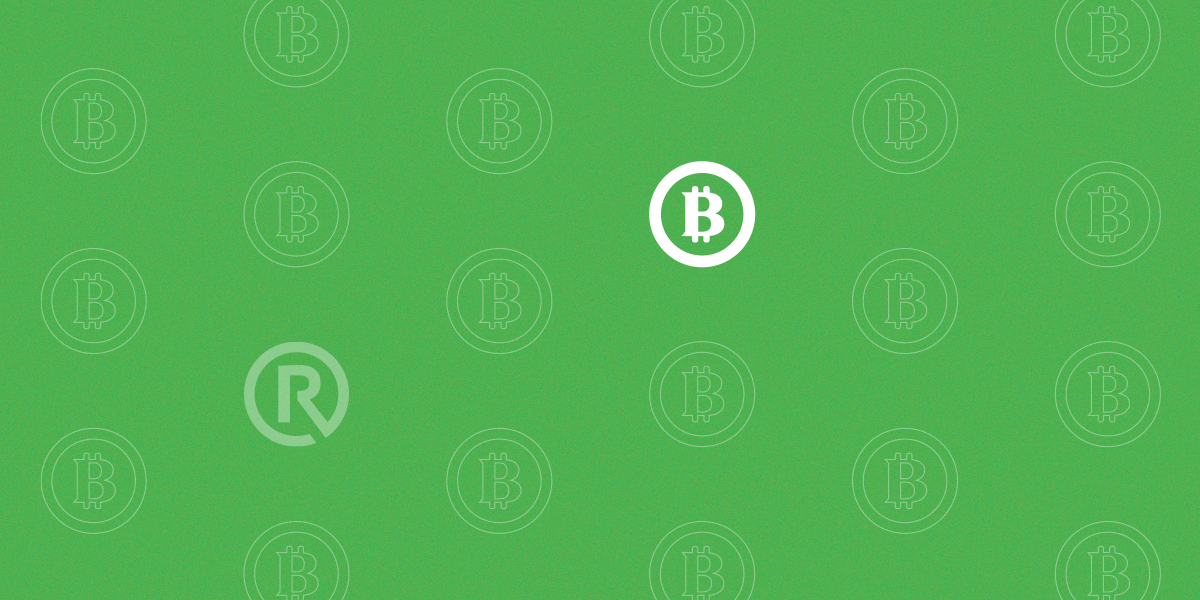 The data shows that bitcoin ownership continues to become more distributed.  Even most of the “whales” today consist of exchanges and custodians that hold BTC on behalf of thousands, if not millions, of individuals. Furthermore, the number of “whale” accounts is decreasing while the number of smaller accounts that own any amount of bitcoin is increasing.

Many consider one of the greatest characteristics of public blockchains to be that all transactional data is freely accessible to anyone. This allows for transparency and analysis on the bitcoin network that is not possible in traditional finance. However, this also makes it easier to scrutinize and critique bitcoin. One such criticism is that bitcoin is highly concentrated among a small number of holders. As trusted guides in the investment world, financial advisors should make a concerted effort to become educated on the asset class, common misconceptions of the space, and how to communicate with clients on important topics of conversation such as this.

Before we dive into this topic, let us first examine why concentrated ownership of bitcoin is potentially a problem. Bitcoin was designed as an alternative financial system, one that is supposed to be more open, inclusive, and less susceptible to outsized influence by any one entity. If bitcoin ownership were to become too highly concentrated, it could lead to a situation where most of the gains from further adoption would likely fall disproportionately to a small number of holders.

It is with good reason that we should closely examine bitcoin’s ownership distribution. Unfortunately, many attempts to do so have analyzed the distribution of BTC based solely on network addresses which have led to the proliferation of this myth. For example, according to CoinMetrics, “18.7M of 18.9M total bitcoins are held by the top 10% of bitcoin addresses while 17.3M are held by the top 1% of addresses.” Stats such as this are misleading, and result in false narratives about bitcoin’s ownership. Let’s examine why:

The main problem with analyzing addresses on the bitcoin network is that one user can control multiple addresses and one address can hold the funds for multiple users. For example, an address that belongs to a large crypto exchange is likely to hold a large number of bitcoin. However, this single address holds BTC on behalf of all its users and thus should be categorized very differently in terms of distribution on the network compared to an individual’s self-custodied address. In fact, many of the largest addresses are entities holding bitcoin on behalf of thousands, if not millions, of individuals. Most reports fail to make this distinction and thus make inaccurate conclusions.

As we can see, it’s not as simple as looking at the addresses holding large amounts of BTC and concluding that the network is highly concentrated. A number of these large addresses are holding bitcoin on behalf of a much larger number of market participants.  Simply counting these “whale” addresses drastically skews the true distribution of bitcoin.

That being said, not all addresses with a large number of bitcoins hold assets on behalf of others; there are addresses that possess a lot of BTC for individuals. However, this number has been decreasing over time. A recent analysis by on-chain analyst Willy Woo showed that if we exclude exchanges, ETFs and public company holdings, the percent of total supply held by single entities with at least 1,000 BTC has decreased over time. In 2012, these “whale” accounts held 54% of the total supply and as of January 1, 2022, these accounts now only hold 24%. 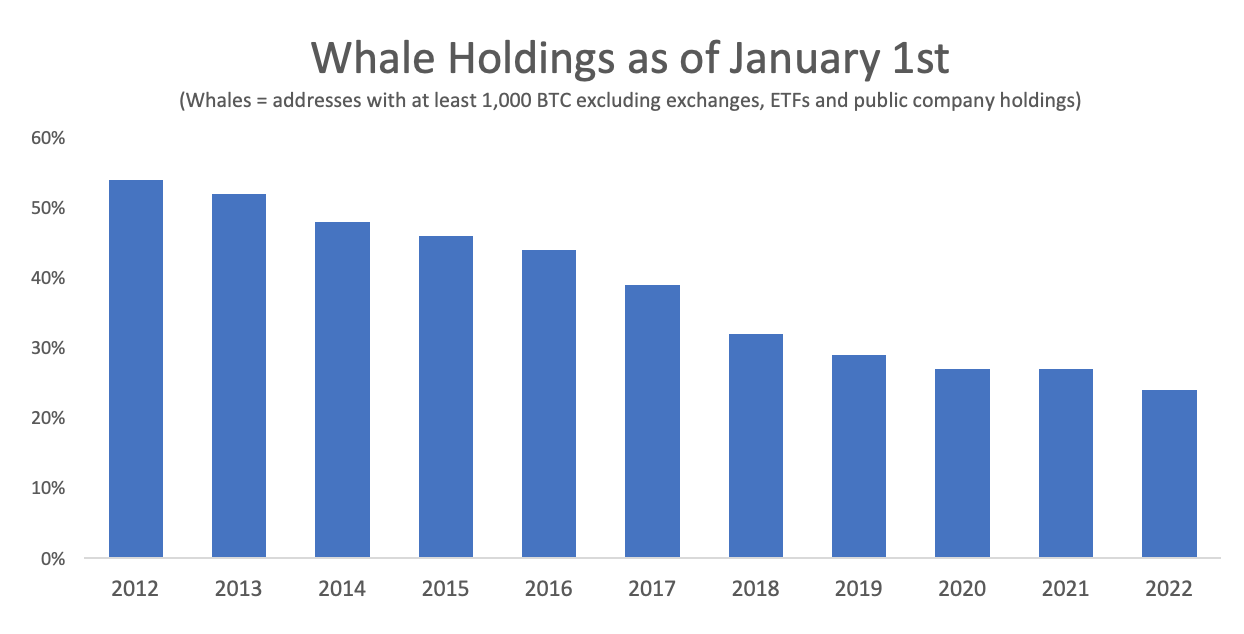 It’s not just the percent of the total supply that matters, but also the total number of large entities. Before we dive into the data, it’s worth pointing out that for the sake of this report, we use “entities” not “addresses.” Remember that addresses can be problematic because one user can control multiple addresses and one address can hold the funds for multiple users. To account for this, on-chain data provider Glassnode developed entity-adjusted metrics through a combination of industry-standard heuristics, proprietary clustering algorithms, and advanced data science methods which helps obtain a more precise estimate of the actual number of users in the Bitcoin network.

Using this more precise entity metric rather than the simple total addresses, we can see that the largest holders (those with at least 1,000 BTC) peaked in February 2021 and have been on a steady decline ever since. 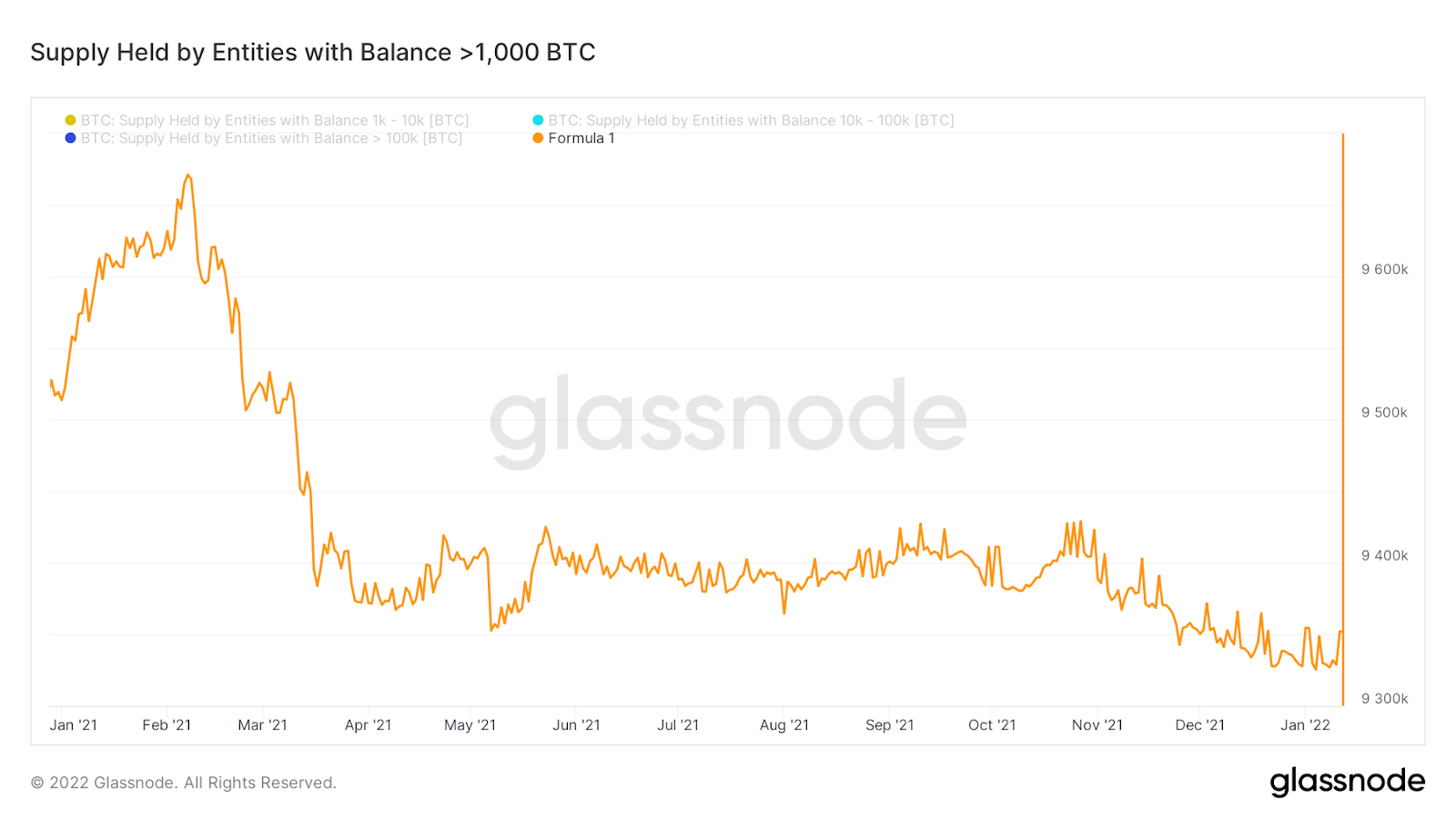 If the percent supply owned by whales is decreasing and the total number of whales is decreasing, who is holding the remaining supply of bitcoin? The answer is that a greater number of entities with a small amount of bitcoin continue to make up a larger percentage of the network. Bitcoin entities with 0.001 – 1 bitcoin in their balance have continued to hit all-time highs. There has never been more bitcoin entities on-chain in the 13-year history that hold these smaller amounts of bitcoin than there are today. This indicates that a larger number of people around the world are holding bitcoin and the total supply held by these smaller entities is increasing. In other words, bitcoin ownership is becoming less concentrated over time. 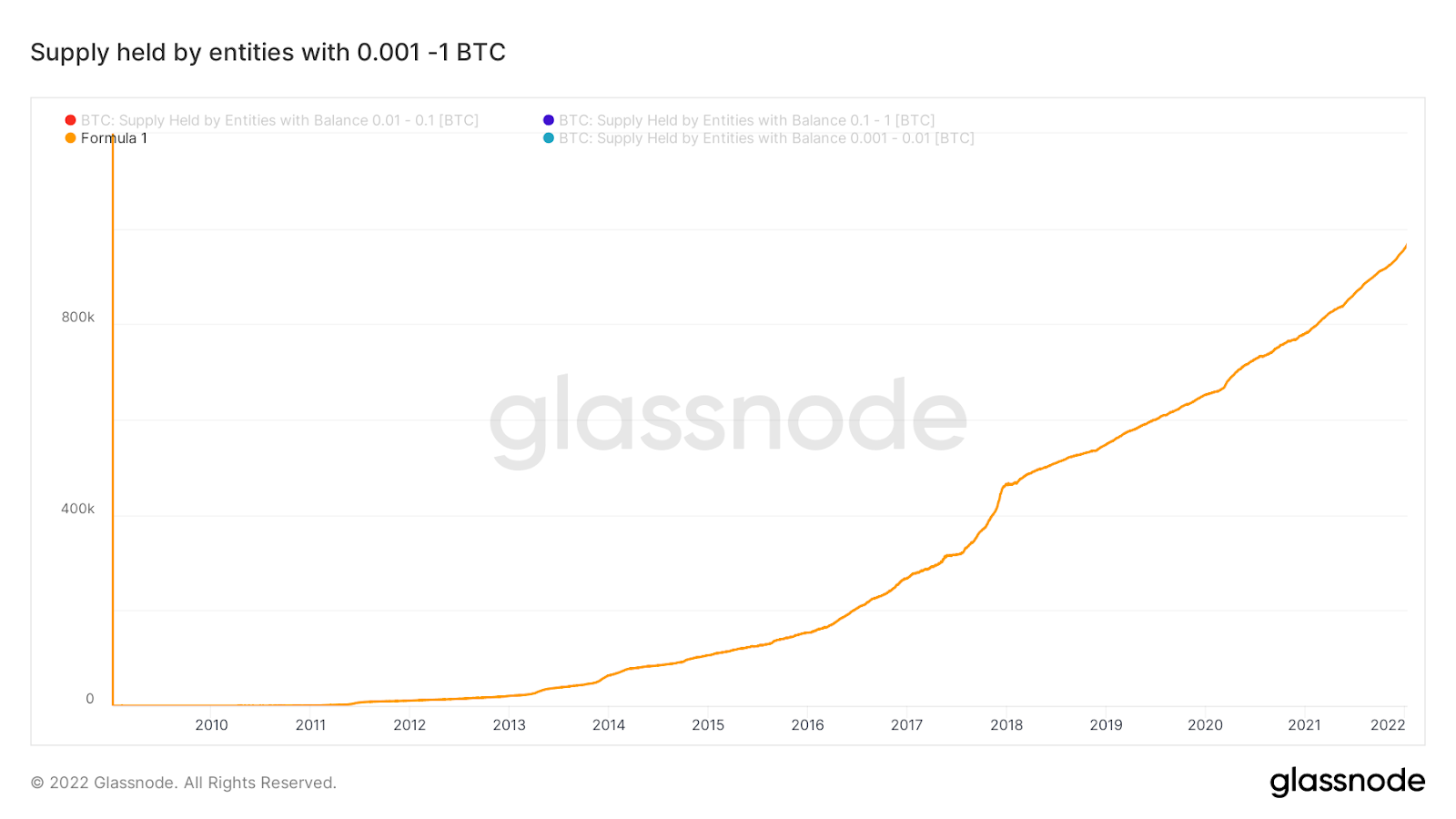 Lastly, we can’t fully analyze bitcoin’s distribution without discussing miners. Miners play an important role in the bitcoin network as they provide the computational power to validate transactions and secure the network. In exchange, miners are rewarded with newly issued bitcoin. It’s through miners that bitcoin comes onto the network and gets distributed to everyone else. Mining bitcoin has real world costs in the form of equipment, maintenance, and most importantly electricity. Thus, miners have operational costs they need to fund to stay in business. Historically, the primary way miners have funded this cost is through the selling of bitcoin onto the market. This incentive to sell to other market participants has led to a natural distribution of tokens across the network which we can see by analyzing the on-chain data. Miners originally owned 100% of all bitcoin in existence when bitcoin was first launched as this was the only way to acquire bitcoin initially. As the market has matured over the last 13 years, the total supply owned by miners is now less than 10%. 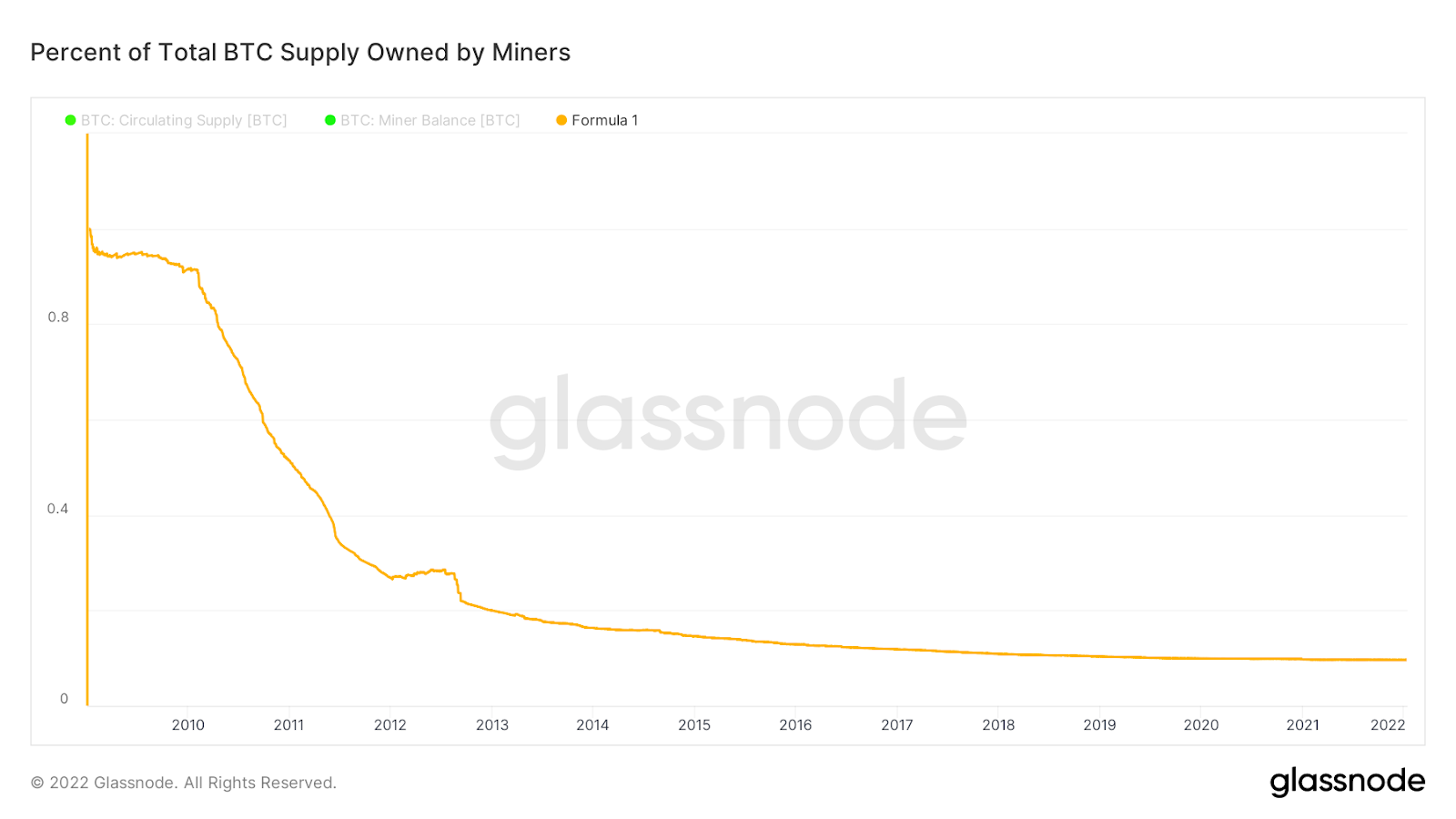 The on-chain data shows that bitcoin ownership continues to become more distributed over time. At the time of writing this, almost a third of all bitcoin is held by participants who own less than 100 BTC, and that number continues to rise. As we discussed previously, most of those larger entities actually hold BTC on behalf of a large number of other individuals. 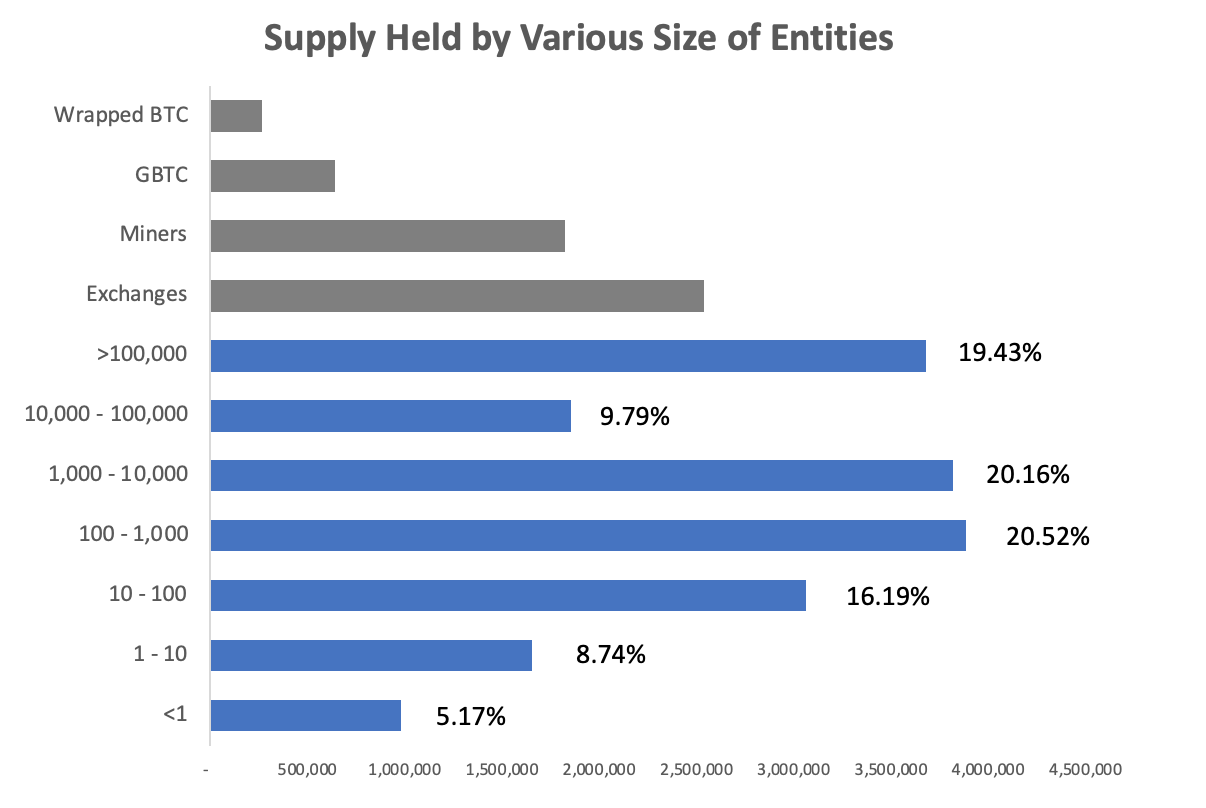 This increase in distributed ownership means that the economic gains are being accrued by more people globally. As bitcoin is adopted by more people around the world, the historical trend would suggest that it could continue to evolve into a true egalitarian store of value that can’t be debased, censored, or manipulated. Keep an eye on the on-chain data to see how this continues to unfold!