Crypto Bear Market: Is Now the Time to Invest? 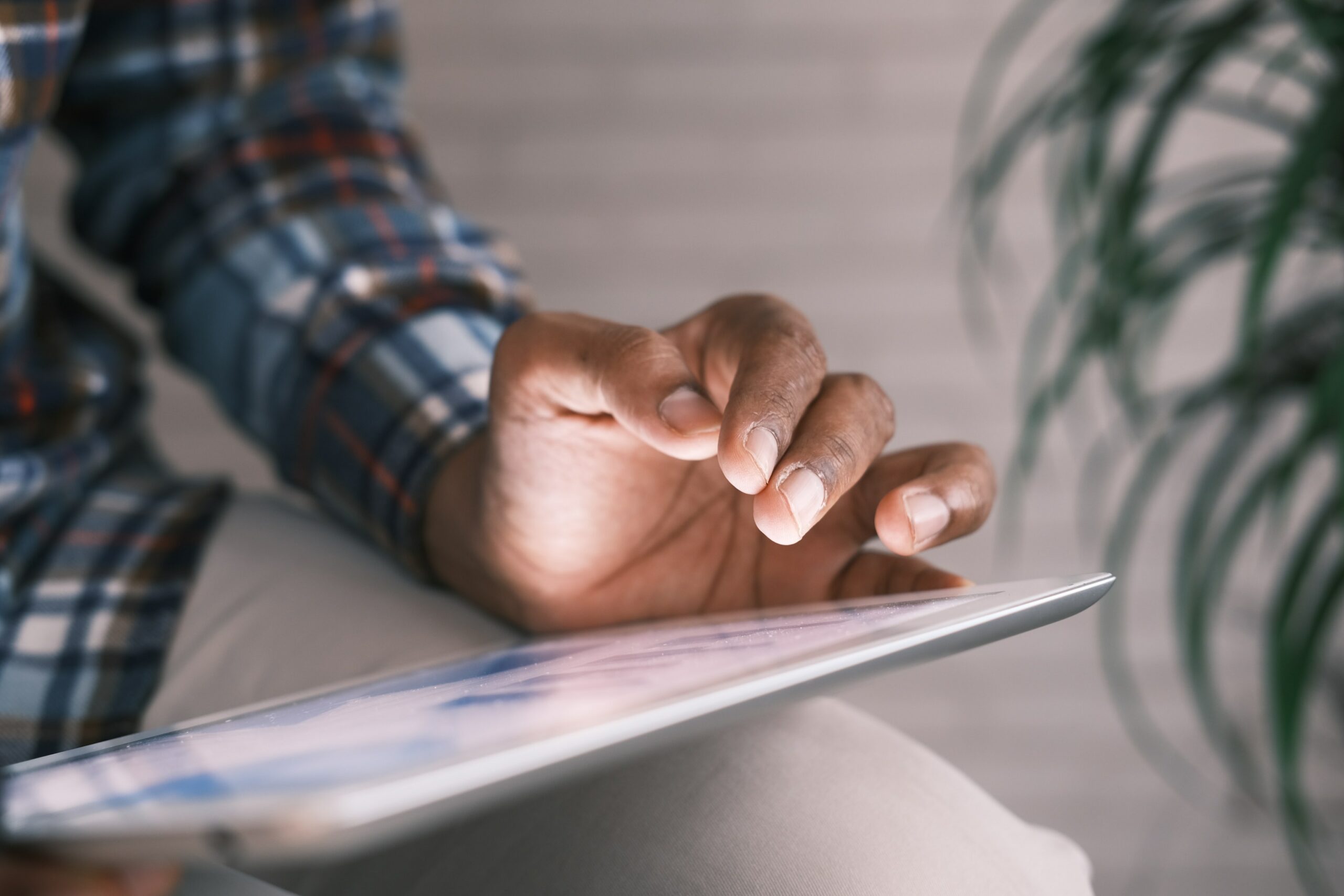 However, after each of these previous crashes, bitcoin and the rest of the crypto markets have bounced back to prices much higher than the cycle before the crash. At Onramp, we believe we are still at the beginning of a multi-decade-long development of the crypto market and though periods such as the first six months of 2022 are difficult to stomach, we are confident that the industry will once again bounce back similar to how it has in the past.

Therefore, we sought to better understand these periods of time. We wanted to shed some light on how long these drawdowns have historically taken to reach their bottom, how long they have lasted, and what the recovery has looked like in previous cycles. The following analysis is not an attempt to determine the very lowest price bitcoin will reach nor is it an attempt to predict the specific day at which bitcoin hits that price. Rather, it’s an attempt to better inform the reader of how bitcoin has acted during its bear markets so that financial advisors can best position their clients crypto portfolios during this time.

As we can see in the chart below, the drop in price over the first half of 2022 is the fourth time in bitcoin’s history that the price has fallen 70% or more from its previous all-time high. 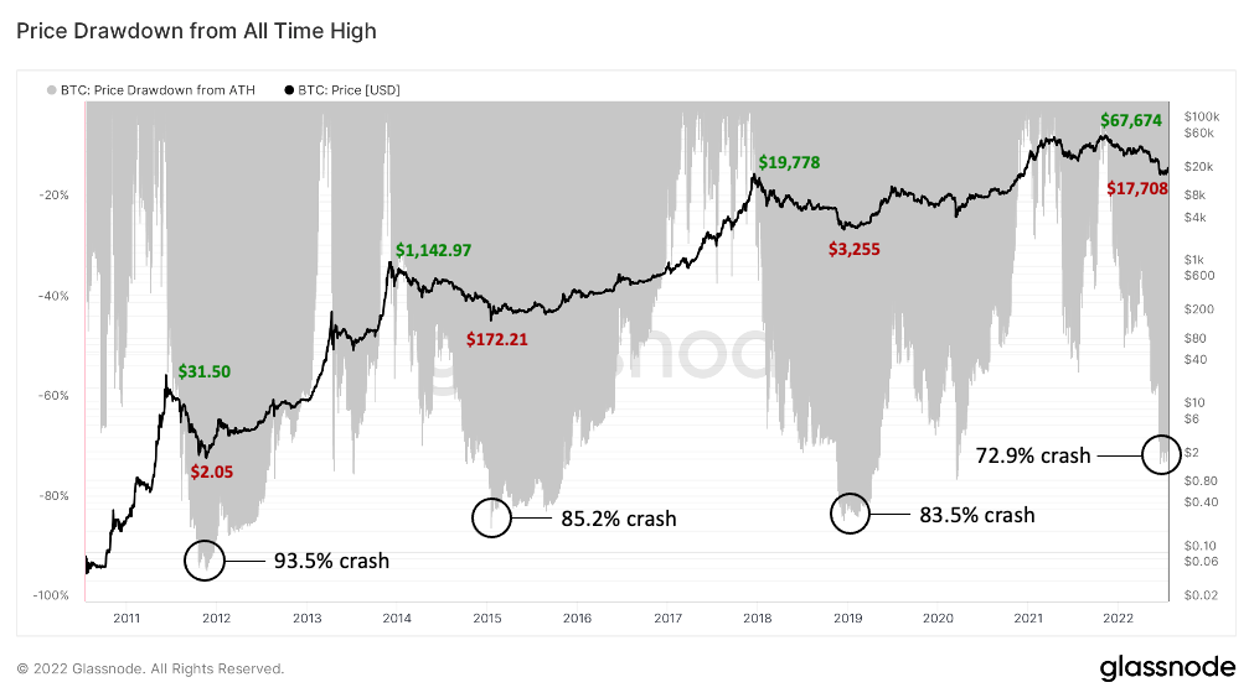 Let’s first examine how long it has historically taken for the price to reach the bottom. Over the past three market cycles, the average time bitcoin took to go from an all-time high to its lowest price for that cycle was 361 days. As of August 1st, it has been 266 days from bitcoin’s previous all-time high set in November 2021. Thus, history suggests that we may have a few more months before we ultimately bottom out. However, it’s worth highlighting that the time from the peak to the bottom for the 2018 crash was shorter than the 2014 crash suggesting that the drawdown periods may be decreasing as the market continues to mature. If that trend continues, it’s possible that the recent drop to $17,700 in June could prove to be the bottom of this current cycle, especially considering bitcoin is up nearly 30% since then. If this turns out to be the case, the time from peak to bottom would only be 222 days.

The second piece of the puzzle is analyzing how long it took bitcoin to recover after hitting its floor.  It is no surprise that bitcoin has historically taken much longer to recover than it has taken to crash. Across the previous cycles, it took on average 654 days for bitcoin to reclaim its previous all-time high after bottoming out. If we assume the $17,700 is the bottom for this cycle (though we can’t be certain yet), that suggests that bitcoin would reclaim the $67k mark sometime around Q2 or Q3 of 2024. 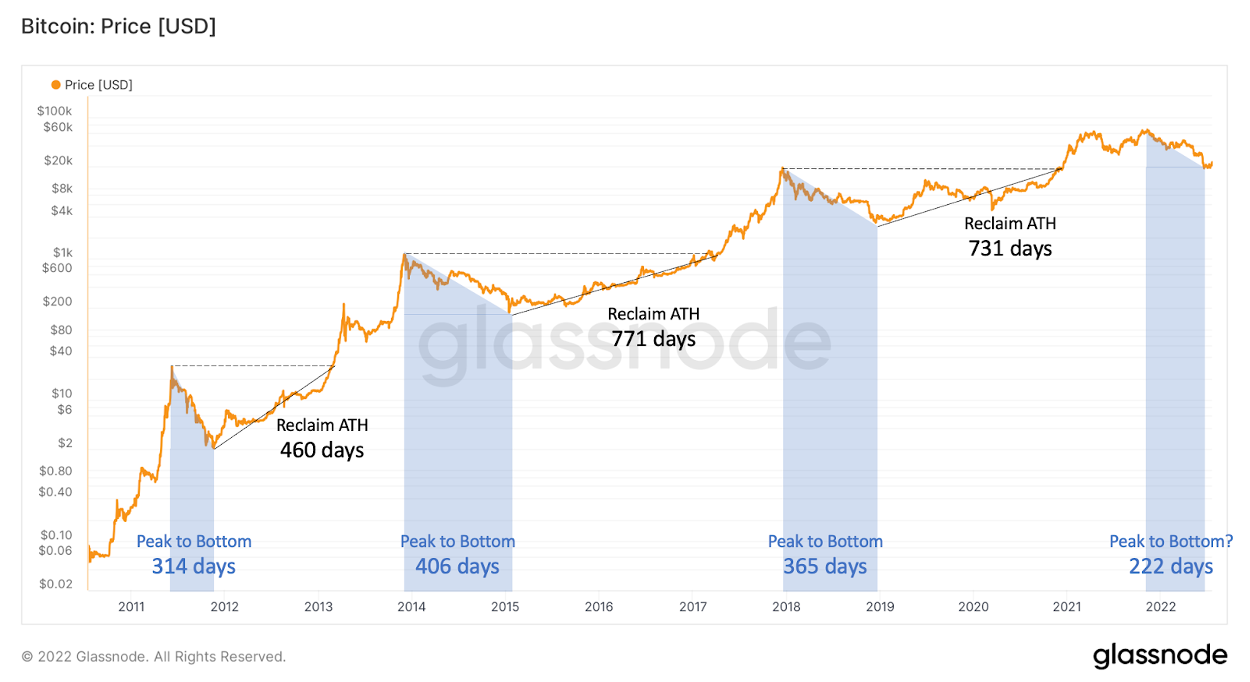 However, buying opportunities, like those presented when prices crash, do not exist forever, especially in bitcoin. We would argue, given bitcoin’s history of reaching and exceeding its most recent all-time highs, that investing at a 60% or greater drawdown from that all-time high provides attractive return potential (for context, as we write this, we sit at a ~65% drawdown). On the flip side, we have seen bitcoin trade in these deeply discounted ranges for over a year. So, if you were to invest now, how long might you have to endure before prices break out of the 60% drawdown range?

In the previous three cycles, the average number of days bitcoin spent in a 60% drawdown or greater from its previous all-time high is 411. Thus far, bitcoin has been in this range for 44 days. However, as we can see in the graph below, in each subsequent cycle, the time spent in this range has decreased. If that trend continues this cycle, bitcoin may only be in this range for a few months given we first crossed the 60% drawdown threshold in early June. In other words, for those who have dry powder, history would suggest that the next few months will likely prove to be an attractive opportunity to deploy that capital. 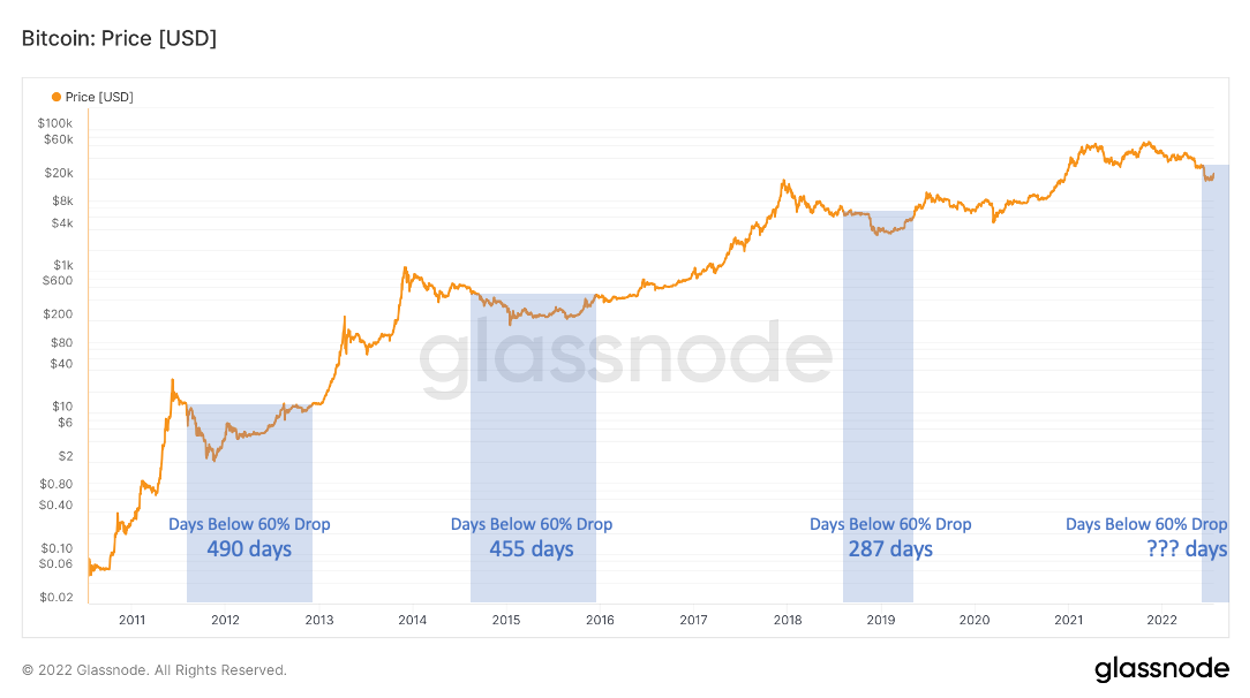 One of the most reliable bottom market indicators has been bitcoin’s realized value compared to its current price. Because we can measure every transaction on the bitcoin network, we can capture the price at which each bitcoin (or fraction of a coin) last moved at. If we take the average of the price all bitcoin last moved at, we get a metric called Realized Price. Thus, Realized Price is essentially the average cost basis per coin. Bitcoin’s market price has only ever crossed below its realized price five times in its history.  Each of the previous four times coincided with the market bottom which is why realized price is one of the most widely recognized on-chain signals. On June 13, 2022, bitcoin’s price dipped below its realized price for only the fifth time in history and stayed there until July 18th.

How does that compare to previous cycles? If we exclude March 2020 which we can consider an outlier flash event, the average time spent below the Realized Price is 197 days, compared to the current market with 35 days under its realized price thus far. 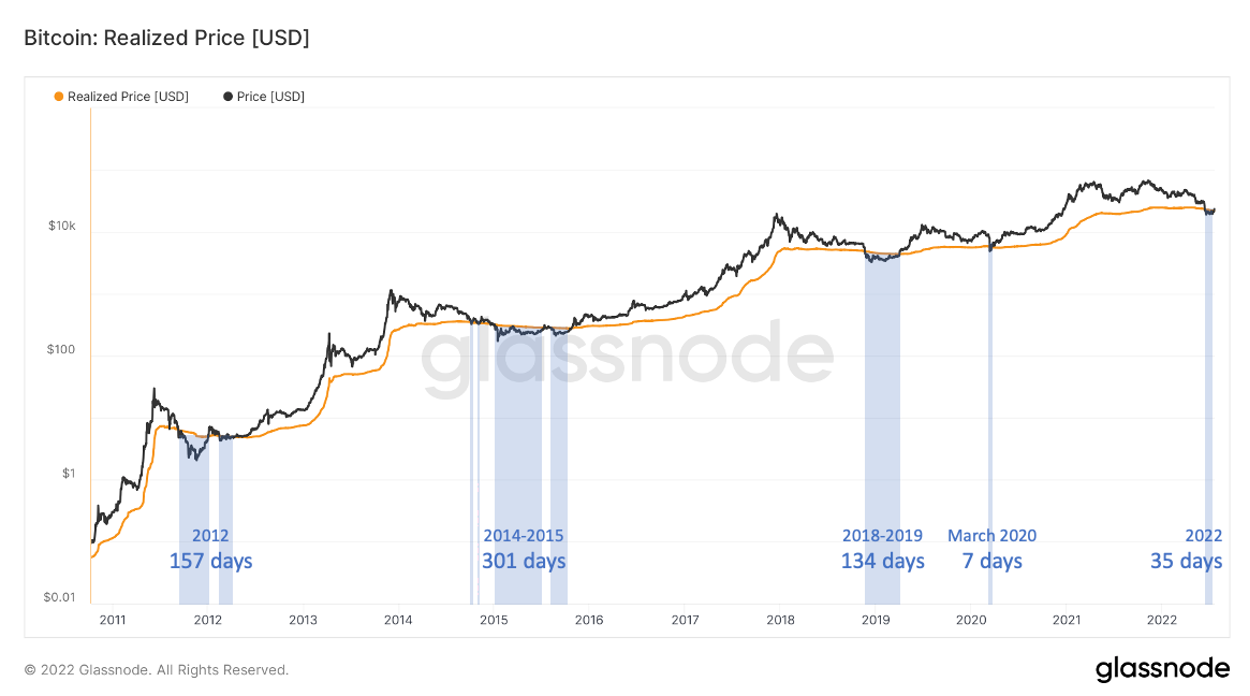 Given we just experienced a period of dipping below the realized price and recovering back above, it’s worth looking at the historical performance had you invested at similar moments in the past. If we isolate the days where bitcoin rallied back above its realized price after being below it (like what happened on July 18th this year), we can see each of those moments in history were extremely lucrative investment opportunities. 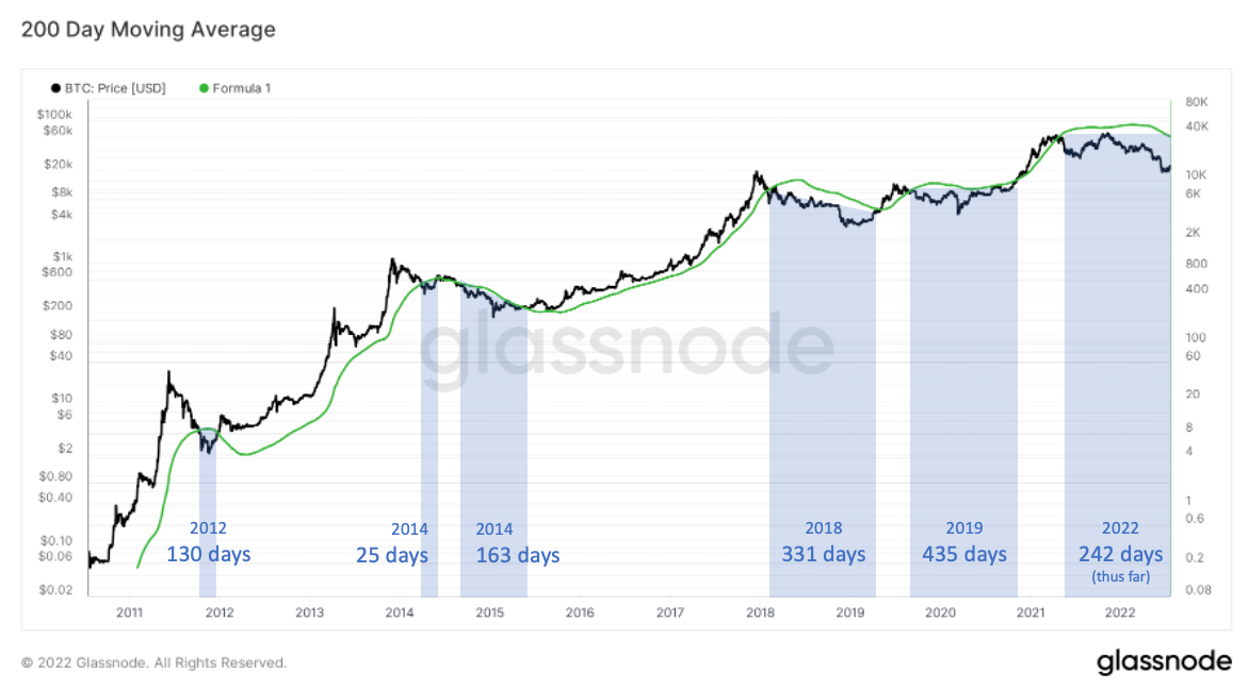 If we isolate the days where bitcoin rallied back above its 200-day moving average after being below it, we can see each of those moments in history were also very lucrative investment opportunities.

The data suggests that the fundamentals of the network have never been stronger and the adoption of bitcoin has never been greater.  Thus, financial advisors should feel confident that this market will eventually rebound much like it has in the past and take advantage of this moment in time.  As this paper has shown, periods such as the one we are currently in do not come along very often and have proven to be incredible investing opportunities in the past. Though it’s likely bitcoin and the crypto markets could remain in a trough for a little while longer, it won’t last forever.

The other lesson this exercise has proven is that you don’t have to perfectly time the bottom to generate outsized returns.  Dollar-cost averaging is a proven viable strategy and one we believe is well suited for this market.  We believe those willing to allocate to crypto during times in which it is undervalued (like it is today) and remain committed to a long-term time investment horizon will have a high probability of being generously rewarded.

Our friends at Grayscale also did a great perspective on crypto bear markets. Well worth the read. And, as always, you can check out Onramp Academy for all kinds of informative digital asset content and tools, available free to financial professionals.

All data and charts provided by Glassnode

Disclaimer:  This is not investment advice. The content is for informational purposes only, you should not construe any such information or other material as legal, tax, investment, financial, or other advice. Nothing contained constitutes a solicitation, recommendation, endorsement, or offer to buy or sell any securities or other financial instruments in this or in any other jurisdiction in which such solicitation or offer would be unlawful under the securities laws of such jurisdiction. All Content is information of a general nature and does not address the circumstances of any particular individual or entity. Opinions expressed are solely my own and do not express the views or opinions of Blockforce Capital or Onramp Invest.